Posted by sophie at 8:32 PM No comments:

So my latest model crush is on the terribly gorgeous, Georgia May Jagger. I mean it stands to reason that she turn out to be frickin' divine given she's the daughter of Mick and Jerry, but geez talk about getting the best of both. She's got Mick's lips and breezy Brit style and Jerry's height, hair and smile. It's enough to make you sick.

Longstanding Surryferners will know that I'm a major fan of the gappy-toothed smile (Susie Sue, Tonze I'm talking to you) and GMJ exhibits one of the best in the business.

She doesn't take herslelf too seriously, another paternal genetic throwback methinks and appears to have a healthy sense of fun. Surely a requirement in the crazy world of high fashion and celebmania.

Good luck to GMJ I say! 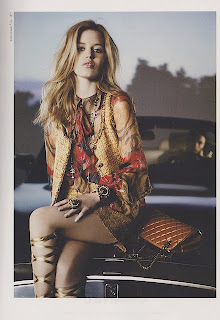 Well there's something very special about the Met Ball. Every year it's this event that showcases the very best of celebrity/fashion fodder. Year after year we see the hottest of models, designers, actors and other forms of celebrities at this terribly fabulous New York event, and every year it throws out some fabulous fashion pics.
This year the late and very great Alexander McQueen was honoured. Enough said.
I was keen to suss out Blake Lively (in Chanel as always), Alexa Chung, Miranda Kerr and Orlando (will they may an appearance?), Anna Wintour, what about my current fave Georgia May Jagger. Take a look for yourself and let me know if you agree with my favourates.
Wow, is it just me, or is this dress a stroke of genius? Turn of the century puff tied sleeves on a sleek, modern evening gown. Sexy and yet so damsel in distress. I love the pirate wench sleeves.
The lady works this Top Shop like it was Gucci, which I thought it was! I've said it before (recently) and I'll say it again. Emerald green is fabulous right now. Ginnifer works this cut-out gown with 'tude and I love it. And check out that jade neacklace. Yes please.

I don't usually love Anna Wintour's choices. Don't get me wrong, she's always immaculately dressed but a little too prim for me. Which is part of her appeal, I get that. Anyway, this year she blitzed it at the ball in a custom Chanel gown. Isn't it just so great? There's something about it that's kind of... inappropriate. But when its draped on the body of one of the world's most thoughtful fashionistas, it suddenly becomes completely appropriate. Loved it.
Gwyneth never really challenges the norm too much, and she certainly doesn't here but this dress is a pretty great look on her. ﻿﻿﻿﻿﻿﻿﻿﻿﻿﻿﻿
﻿﻿﻿﻿﻿Talk about drama. Now this is the kind of dress I expect to see at the Met Ball. It's a ball after all.﻿﻿﻿
﻿﻿﻿﻿﻿﻿

Ok so it's not ground-breaking but look at that detail and the beading. It's a work of art. McQueen of course. Hair looks great too. She's trying new things with her hair which is cool. Who's the guy?
Posted by sophie at 1:49 PM No comments:

A Food Tour of Singapore

So I've just returned from a trip to Singapore with my friend Pippa visiting our other friend Prue where we have done many fun and exciting things however nothing more, than my favourite pastime, eating.
Restaurants, bars, hawker markets, home cooked treats, street stalls... the lot. Highlights  have included a warm and delicious meal with friends at Italian restaurant, "No Menu", pre dinner crab rolls and tempura prawns at "Kinky" a youthful and beautifully positioned bar which doesn't take itself too seriously, the mouthwateringly good soupy dumplings at "Din Tai Fung", chili crab at a market in Chinatown and delicious roti prata at "Mr Prata". And then there was the wonderfully light and fragrant salmon and roasted salad served to Pippa on I arrival from Prue's generous and kind helper Bernie.

Then there was the outstandingly good ramen and gyoza courtesy of unfussy and small cafe "Miharu Sapporo" at the Gallery Hotel at Robertson Quay which beat previous record holder on my book of "Best Ramen" sampled in January in Grand Hirafu, Japan.

Posted by sophie at 8:24 PM No comments:

We've all ooh'ed and ahh'd over it now but here's my summation of the event just in case you haven't had enough.

So the bride wore McQueen. Hooray! Just as I was hoping.

Here are my thoughts on Kate's dress. Wonderfully Grace of Monaco up top, beautifully simple. Fabulously flattering neckline that was beautiful, classic and a little but sexy all in one. Loved the soft veil. Silk tuille with hand embroidered flowers on the trim. What a special item for her to hang onto and perhaps pass on to a daughter. Gorgeous full skirt and train but not too old fashioned. What a tiny little waist she has and so beautifully presented in that cinched in gown. I think she hit the right balance between tradition (lace, hand embroidery etc) and modernism (simple, choosing McQueen, lack of jewels apart from fabulous diamond earrings).
And Pippa her little sister looked so chic and modern and stylish. Divine. I mean she's still a commoner isn't she, ;)  so I can say it: she looked hot. Absolutley hot. 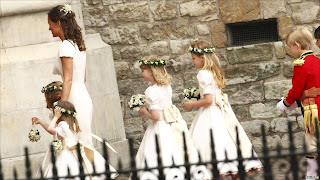 Ok now to the boys, how hot did Harry and Wills look in heir official get-up? Spunks! I'd like to see Harry and Pippa hook up at the after party, sorry Chelsea but what a fab pair they'd make.

As for the guests, well I can't say I was terribly impressed. Were any of you? I don't doubt there was an awful lot of hairspray used and  hours in the salons of London used by the congregation in preparation, but really, apart form a few standouts, I didn't see much in the way of chic day wedding dressing. And it was a roayl wedding being watched by over 2 billion people!
I thought Victoria and David Beckham looked fabulous. She six months pregnant in one of her own designs and a Phillip Treacy hat, looked appropriate and stylish I thought. He clad in a traditional morning suit and sporting wonderfully debonair hair looked sensationtional.
Some of the European royalty upped the standard including Princesses Marie Chantal of Greece and Letizia of Asturias. Both adhering to traditional morning wedding attire rules (one colour across dress, jacket and accessories) but not in the dull manner carried out by so many of the other guests.
﻿﻿﻿﻿
﻿﻿I thought Sophie Windsor looked great. She was decked out in nay Armani and again, played by the palace rules without saying goodbye to current fashion and she did it well.

But fashion aside, one of the most touching things about this wedding is the way Wills kept whispering nice things like "I love you" and "you look beautiful" and winking at her presumably to stop her getting too freaked out and nervous. Just a little reminder that at the end of the day, regardless of the 2.4billion people watching, its just their wedding after all. Ahhhhh.
Posted by sophie at 1:24 PM No comments:

I think overall the quality of last night's fashion was a vast improvement on years prior. The official broadcast on the Nine Network had a very E News/Emmy's/Oscars feel to the it complete with sponsor branded umbrellas, greenery edged red carpets and Giuliana Rancic style fashion interviewing of all the attendees. One can only assume the network took a long hard look at how E has been doing it for years and borrowed the recipe, rather successfully I thought.

Now, onto the fashion. It's unfair pitting the puppies from Home and Away against international models but in that contest, unsuprisingly the models trumped all. Congratultions to Sarah Murdoch for taking out Best Dressed By a Long Shot in the french navy Roland Mouret floor length gown with tie cut out detail. Perfectly fitting, magnificently cut and on trend in colour, it was perfect in my eyes. And accessorised with chic, simple hair. Winner!

Megan Gale also failed to dissapoint looking statuesque and superb in white Alex Perry, although I wasn't with her on the choice of earrings. She looked like she was wearing a bluetooth earpiece. Not cool! One day though I'd just like to see Megan try something a little less safe. How about some Lanvin? Or some Prada???

Also in white and looking fabulous were Lee Furlong, who shows us that Sports newsreaders not only can be women but they can be very glamorous women, although I thought she looked a little thin and drawn. And Erin McNaught who would have been further up my list than Number 3, had her dress not reminded me very much of one Jen Hawkins wore years earlier. Still, she looked fabulous, and she wins Best Hair and Make-Up from me.

I also LOVED Asher Keddie in J'Aton, which so immaculately defined her figure and stood out stunningly from the other 500 J'Aton gowns which always seem set on exposing as much skin as possible. A class act is Asher both on the red carpet and in front of the camera.

I also thought Catherone McClements stepped it up this year in the fashion stakes with her dress - it was refreshing to see someone in a dress not ticking all the usual logie boxes (boobs pumped up and out, slit to thigh, skin everyehere...) although she always seems a little awkward when she walks, as though she's just a tomboy at heart who doesn't really want to be there, but for that I think she's cool.

Then there was Esther Anderson whom I've never seen before but apparently is from Home and Away.. She wore Alex Perry and once she gave the dress a bit of a spin, I found I kind of liked her dress too. As above, I usually find AP a bit safe but at least they're not tacky gowns. I thought this dress celebrated her youth whilst also giving her a fashion forward shot of colour and sophistication. Well done young Esther.

Finally there was Katy Perry who performed and wore an emerald green knee length number which was cool, and I do love emerald green but I thought she could have gone further given her superstar status. Not a time to melt into the background Ms Perry!

And as for hosts, please Logies organisers of 2012, PLEASE just book Adam Hills for the job now. He's smart, funny, whippishly quick and just so much more entertaining that Shane Bourne. Go on.
Posted by sophie at 9:53 AM No comments: